Easter –­ what’s in it for vegans?

It’s Easter and everyone is busy wishing friends and family ‘Happy Easter’ and gushing about pictures of lambs gambolling in lush green fields. If you’re not religious, and we’re certainly not here at VV HQ, then I’m not sure what there is to be happy about if you’re a vegan. In fact, I was prompted to thrash out my thoughts about the Spring festival by a remark on a Facebook group. Commenting about a TV farming programme featuring lambing, the writer said that they found the sight of Easter lambing uplifting. I’m fighting the urge to comment because I’m not really in the mood for a row at the moment, but it begs the question: what exactly is uplifting about the birth of an innocent creature destined for the dinner table? 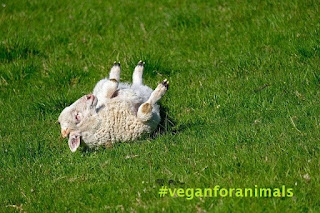 Closer to home, and in real life, MiL has been lamenting the fact that the lockdown means other members of the family can’t visit for Easter Sunday family lunch. A massive bonus of the lockdown for me, being chief cook and bottle washer. I’m not sure what they would have thought of a repeat performance of the Christmas totally vegan dinner, but that’s what they would have got. It’s bad enough reheating their meat-centric ready meals, and it’s been pretty tricky lately procuring them with the panic buying and restrictions in force. I don’t like hanging around long in what Mr VV describes as the aisle of death, and when it comes to fresh carcasses a fish fillet is about as far as I’ve been able to go. No doubt some will think that even with that I’m a hypocrite but, as I’ve mentioned before, I view feeding the oldies in the same way as feeding the dogs. They’re all too old and set in their ways to change.

I wondered if other vegans had similar feelings about Eastertide. Type ‘vegan plus Easter’ into Google and you’ll get 429,000,000 hits about eggs; even on page 39 the search results were still about the best Easter eggs, the best vegan chocolate eggs, the list goes on. OK, I’ll admit that we did buy a vegan chocolate Easter egg in Lidl a few weeks before the lockdown, but we ate it pretty quickly soon afterwards. Going back to my mixed feelings about the pagan festival of Eostre, I did a quick bit of research (aka: posed a question on a couple of vegan groups) to gauge the feelings of fellow vegans. Seems I am not alone, many reported that they follow no religion, something I have noted before in vegan groups, and others that, like Christmas, Easter was another time of “cruelty, religion and hypocrisy”. The best reply I read was, “honestly, I’m just in it for the chocolate”.

Eventually, I decided that I did not want to leave the lambing issue unchallenged. It was time to make a point, although the likely result would be inevitable in a group where the mere mention of the V-word sets the carnies’ blood boiling. Light the blue touch paper. As Mr VV says, being thrown out of a group for vegan comments is an honour. I just posted a vegan lamb meme, sat back and waited for the flack.