This week I’d planned to write about Project 333, but time just flies by and I still haven’t started, let alone finished, my clothing count so I’ll leave that for another time. Effectively, running two households, plus a small business, doesn’t leave me with much spare time for researching and writing. Also, for the last three or four weeks Mr VV and I have been on a bit of a health and fitness drive. Since we arrived in the UK we’d been indulging in the best that Sainsburys offers when it came to vegan junk food: shroomdogs, shwarma ‘meat’, Hellman’s mayo, ice cream and vegan cheesecake to name a few. It was probably the summons for a health check with the practice nurse when we registered at the local surgery that galvanised us into action. I was aware that we had put on a few pounds over xmas, but faced with the stark facts when she was brandishing her tape measure, I realised that we needed to get ourselves into gear.

So, we bought a Fitbit (I wear it, we’re too mean to buy two!), cut out alcohol at home, gave up our five o’clock salty snack habit and started walking, every day. It’s not easy to fit all this in. The walks are too long for our elderly dogs, so they have to stay behind while we set off on the local footpaths for a couple of hours, three or four times a week. I’ve actually had to schedule the walks onto the whiteboard that rules the regime here, otherwise it is so easy to let distractions take over. Looking after elderly relatives is hard. There’s no two ways about it, and I take my hat off to anyone who is toiling in the role of carer at the moment. But, as one of my wise friends advised me, it’s important to look after yourself, otherwise you’ll be no good for caring for anyone, and our weekly walking routine is certainly paying off.

But, what has this got to do with the title of this week’s blog? Well, after a few strict weeks eating at least four portions of fruit a day, two glasses of smoothie and loads of healthy whole food plant-based meals, Mr VV was craving a little treat. He’d also sneaked in a tub of vegan ice cream from Aldi 😊 We had plenty of apples in the fruit bowl, so instead of our regular evening raw apple, I decided to make an apple crumble. Rather than cook up a huge, family-sized crumble that could last for days (or be eaten in one fell swoop) I fixed on cooking up two individual mini crumbles. It was at this stage I realised that I’d forgotten to bring any ramekin dishes with us … hmm. We did have two glass dishes saved from an indulgent Gu (vegan) pudding – would these work? The internet was divided in opinion as to whether Gu glass dishes were oven-proof, so I carried out a quick test in the airfryer. No harm done. In fact, why not cook the crumbles in the airfryer? Result: perfect mini apple crumbles ready in about half the time of the conventional oven. According to Myfitnesspal they’re just 118 calories per pot (excluding the ice cream, of course). 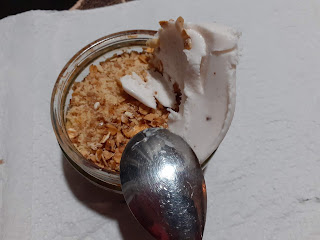 Peel, core and dice the apple. Squeeze lemon juice over the apple and mix. Then, arrange the pieces in the two ramekins dishes, until they are each about three-quarters full. Sprinkle a generous teaspoon of cinnamon over the apple. 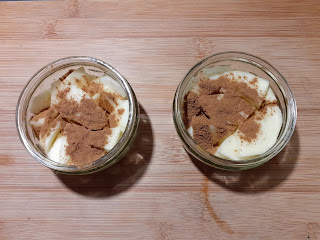 Measure the flour and vegan spread into a small bowl and use your fingertips to rub in, until the mix looks like breadcrumbs. 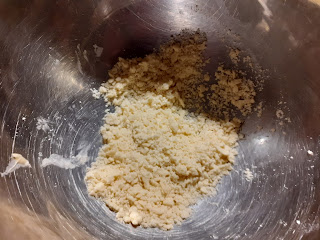 Stir in the sugar and oats. Spoon the crumble topping mix into the two ramekins, pressing down firmly and level off the top. 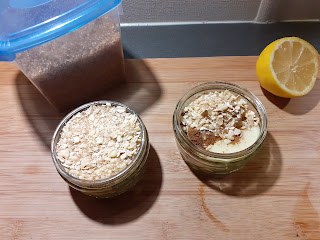 I cooked these in an air fryer (cheap version from Action) at 180c for about 18 minutes. You could also cook in a conventional oven at 180c, probably for about 30 minutes.