I suppose it was her experience of the Second World War and rationing, which continued long afterwards, that made my mother quite zealous about avoiding food waste. She regularly admonished me to ‘eat up because there are starving people in the world …’ and she could make another meal out of any leftover scraps. She never went shopping without a list. A weekly meal plan hung on the kitchen noticeboard and she shopped accordingly. I suppose I must have inherited some of these habits because, like her, I abhor food waste. 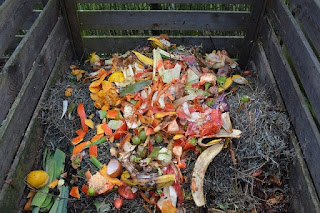 In France we had two active compost bins and usually made enough rich, nutrient-filled compost to fill our annual flower pots and herb garden. Last year we even gave away some of our surplus. So, we were very keen to get a compost bin on the go whilst we are here in the UK. One of the first things we bought in B&Q was a robust composting bin and it went into action on day one. As we want to grow ‘vegan’ vegetables, we’re restricting the contents of the bin to our own fruit and vegetable peelings. Any food waste from the House (and there is plenty of it) goes into the council supplied food caddy that is collected every week. Because the council’s composting operation is at much higher temperatures than you can achieve in a domestic setting, they are able to accept a much wider range of waste including raw and cooked meat, stuff we would never want to contaminate our vegan compost bin.

Before we left France I had run down our larder so that I could minimise the weight of the moving boxes. I also didn’t want to leave anything in the house whilst it was locked up – sorry Mrs Mouse and the Loir family. I’ve gradually been restocking things like olive oil, vinegar and a few tins, and next week hope to make our first trip to the zero waste shop to explore their range of loose products. After the initial settling in period when we seemed to go to the supermarket every day, this week we had our first delivery from Sainsburys.

Although it’s only four miles away, a trip to do a ‘big shop’ still takes a couple of hours out of the day, time that could be better spent. An online order also enables me to control exactly what we buy, as we’re not tempted by impulse purchases. And, it’s great for adding food shopping for the in-laws who are now relying on us for meals. But, I wondered if shopping online was actually good for the environment. The general conclusion of the research I’ve read is that if your shopping journey is less than two miles then it is better to shop in person, whereas any journey over this distance is better to have your goods delivered. Sainsburys offer the option of ‘green’ delivery days when the van is already booked to be in the area, and with no packaging, so I selected a ‘green’ slot on Tuesday lunchtime and the delivery cost was just 50p! For ‘top-up’ shopping during the week, in particular to keep the in-laws endless supply of milk flowing, I’m just using the village shop. It’s a great resource, open from seven until ten, seven days a week and can supply virtually all of their needs; the walk there is good exercise, too.

One of the key things I did before starting the online order was to draw up a meal plan for the week and a list of all the products we use on a daily or regular basis. So, I listed out the components of our breakfasts and lunches, as we tend to eat the same or very similar things every day. I checked the storecupboard and added any items that were low or almost run out to the order. The pets’ food falls in this category too. Next, I drew up a plan for main evening meals for the next week to ten days. This isn’t set in stone, so I sometimes swap meals around if I have forgotten to start prep early enough or if we just want something quick because we are tired or busy. There are a couple of pre-prepared options like Gardein faux-fish fillets and a vegan pizza for junk-food Friday aka ‘chav tea’. Of course, as our meals are all vegan and based on lots of vegetables, legumes and pulses they’re actually not that unhealthy.

This week the menu plan has worked out well. I was able to stretch one meal into two as the Vivera Shawarma (faux kebab meat made from soya) that I bought for a pasta dish was enough to make some delicious wraps the following day, accompanied by a chickpea salad, avocado, leaves and pomegranate seeds. We ate it so quickly I forgot to take a photo. I’m also trying to expand our repertoire of recipes yet again, so each week I’m adding something new. This week it was a new lentil curry, which I based on a soup recipe from The Stingy Vegan, but with less water. Delicious and what a delight to easily get hold of fresh coriander without a 60km round trip to Grand Frais!

With our food waste, menu planning and shopping well under control it was time to turn my attention to the House. Each time we’ve visited in the past I’ve attempted to get some aspect in order; last September it was the freezer – three black bags of out-of-date products, some barely recognisable beneath the freezer burn. Since MiL’s accident I’ve been in charge of their meals, which gives me a great opportunity to sort out the shelves. So far, I have managed to get the fridge in order, although I’m fighting a losing battle with their milk obsession. If there is anything less than six pints they fear running out. I don’t know what sparks this but it is something I’ve noticed for many years: any hint of snow and the local shop or supermarket is cleared out of milk in a few hours. What do they do with it all? Sadly, and I know I’ll be in for some criticism from the hard-core vegans, I haven’t been able to convert them to plant milk as yet. So, I’ll also admit now that I am also ‘cooking’ (heating up) their meat-based ready meals for them. I draw the line at actually preparing any meat products, but simply popping a meal in the microwave and serving it up with some potatoes and veg I deal with on the same basis as feeding our old dog his favourite food. With a combined age approaching 180, I feel it is too late to get them to change their habits now, although FiL happily chowed down on a fully 100% vegan Christmas dinner and was none the wiser.

Next week I plan to tackle the larder shelves in the House, where I’ve already spotted some tins and jars with BBE dates several years behind. It is so difficult for older people with smaller appetites to use up everything in one sitting. So, I’ve been using my meal planning skills, and the ability inherited off my mother to use up scraps, to use up things that have been bought and forgotten, before they go out of date. I’m hoping that in time, with careful meal planning for the House, I’ll be able to reduce not only the amount of food waste produced, but the food bill too.