The jury's out on jackfruit

Jackfruit seems to all the rage as a meat substitute in vegetarian and vegan meals at the moment. Apparently, it was one of the biggest vegan food trends in 2017. This is due in some part to its ability to imitate ‘pulled pork’ – another food trend in itself from a few years ago. Given that we didn’t like pork even before we became vegetarian and latterly vegan, it wasn’t a product that I’ve ever actively sought out. However, the opportunity to try it came recently when a US friend brought me two boxes of pre-packed jackfruit on her return from the States. And, by coincidence, the very same week a Facebook friend had located jackfruit in the Limoges fresh food mecca, Grand Frais.


Jackfruit is a large, green, rather ugly, fruit, native to the Indian continent. In fact, it’s the national fruit of Bangladesh. It’s been cultivated in India for over 3000 years; apparently, it’s easy to grow and produces a prolific crop, so not surprising it is staple food of the area. The blurb on the boxes put forward the justification that only surplus fruits were purchased from Indian farmers. Thus, aiding the economy rather than taking food out of the mouths of Indian peasants. (A criticism often levelled, usually unfairly, at the Western followers of plant-based diets.)


Jackfruit can be used ripe (sweet dishes) or unripe (savoury dishes) and the two boxes I’d been given were of the unripe variety, one cubed, the other shredded. They weren’t quite ready-to-use as I had to simmer for ten minutes, but were easier to prepare than peeling and de-seeding a whole fruit. In terms of a meat substitute it doesn’t seem that they compete with soya on protein, but jackfruit are a good source of fibre and low in fat and calories. Protein-wise, a 100g portion of soya contains 18g of protein compared to 3g of protein in the same size portion of jackfruit.


The internet was full of recipes for jackfruit and it seemed that if I wanted to avoid the pulled pork scenario, then one of the best options would be burgers or meatballs. After consulting a variety of recipes I devised my own, using a combination of methods. One thing I did notice was that far more binding agent (I used chickpea flour) was needed than any recipe suggested. I followed a similar procedure for both burgers and meatballs, although I forgot to photograph the burgers. I simply simmered the jackfruit for ten minutes until all the water was absorbed, then added the remaining ingredients and moulded to shape. I did whizz up the chunks in the food processor once cooked, but the chunks did shred (I suppose that’s where the ‘pulled pork’ comes from), so this was perhaps not necessary.


Taste-wise the burgers were the best. They tasted pretty much like regular burgers and we reckon would fool many a meat-eater. But, would I buy jackfruit again? Maybe if it was pre-prepared, but I don’t l think I’d bother with preparing a fresh fruit – as I cook meat substitutes as a protein source I’ll probably stick to soya, seitan and pulses for burgers, chilli and the like. 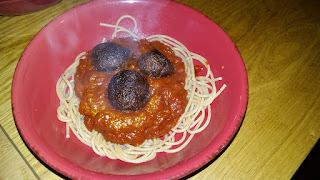 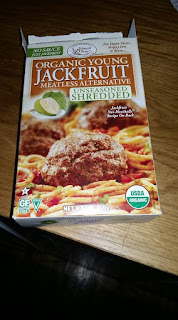